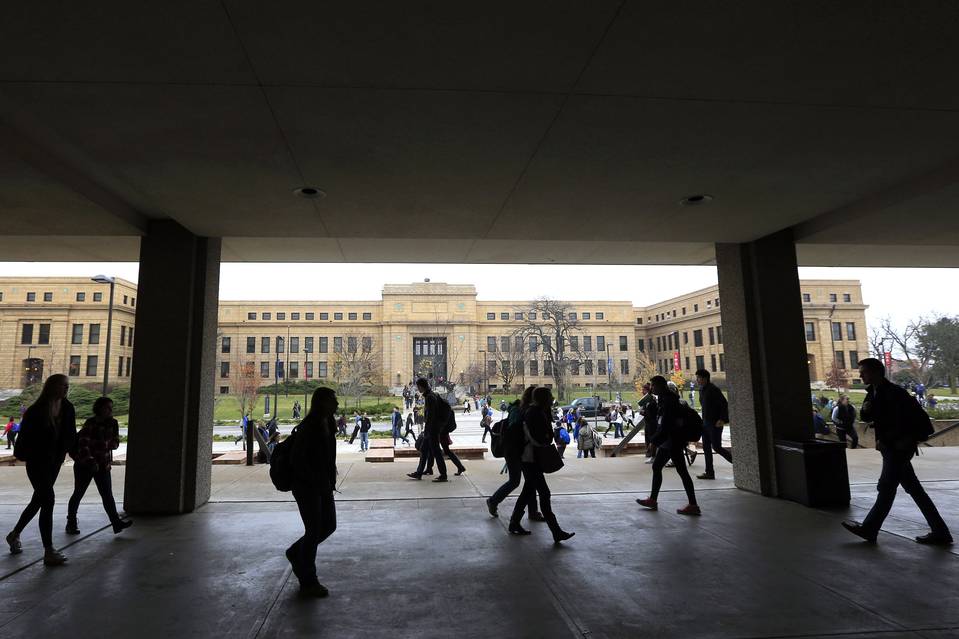 More than 40% of Americans who borrowed from the government’s main student-loan program aren’t making payments or are behind on more than $200 billion owed, raising worries that millions of them may never repay.

The new figures represent the fallout of a decadelong borrowing boom as record numbers of students enrolled in trade schools, universities and graduate schools.

While most have since left school and joined the workforce, 43% of the roughly 22 million Americans with federal student loans weren’t making payments as of Jan. 1, according to a quarterly snapshot of the Education Department’s $1.2 trillion student-loan portfolio. 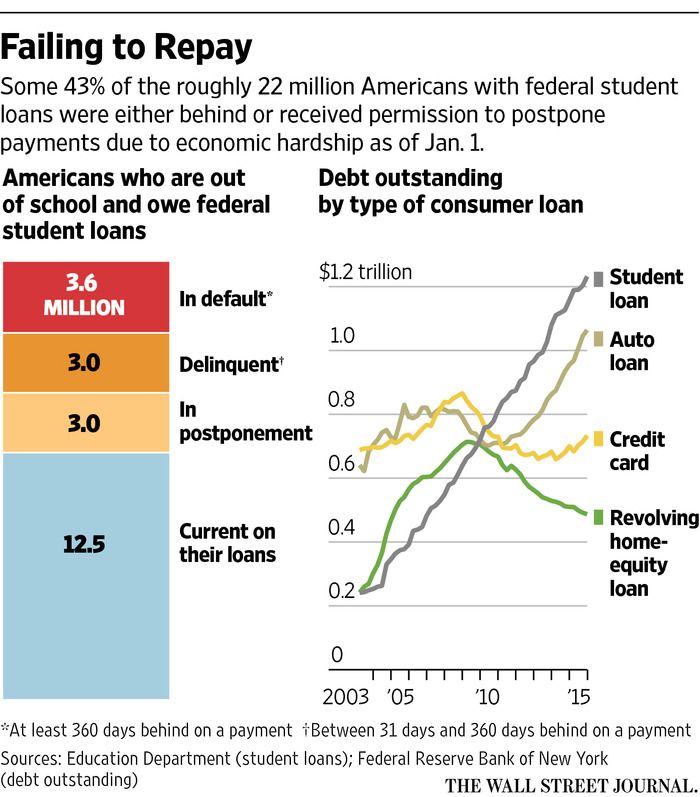 About 1 in 6 borrowers, or 3.6 million, were in default on $56 billion in student debt, meaning they had gone at least a year without making a payment. Three million more owing roughly $66 billion were at least a month behind.

Meantime, another three million owing almost $110 billion were in “forbearance” or “deferment,” meaning they had received permission to temporarily halt payments due to a financial emergency, such as unemployment. The figures exclude borrowers still in school and those with government-guaranteed private loans.

The situation improved slightly from a year earlier, when the nonpayment rate was 46%, but that progress largely reflected a surge in those entering a program for distressed borrowers to lower their payments. Enrollment in those plans, which slash monthly bills by tying them to a small percentage of a borrower’s income, jumped 48% over the year to 4.6 million borrowers as of Jan. 1.

“The servicers aren’t quite promoting them in the way they should be—I think some of it’s information failure,” said Rachel Goodman, a staff attorney at the American Civil Liberties Union.

But the picture seems more complicated.

Navient Corp.NAVI0.00%, which services student loans and offers payment plans tied to income, says it attempts to reach each borrower on average 230 to 300 times—through letters, emails, calls and text messages—in the year leading up to his or her default. Ninety percent of those borrowers, which include federal borrowers as well as those who hold private loans, never respond and more than half never make a single payment before they default, the company says.

The Obama administration—worried about taxpayer costs and the prospect of consumers damaging their credit by defaulting—has stepped up efforts to reach borrowers and offer the income-based repayment plans. In some cases, the government is garnishing wages and tax refunds of borrowers who refuse to pay.

Education Department officials note that some defaulted loans are from prior decades and, unlike private lenders, the government is severely limited in its ability to write them off and remove them from the books. They also point out that the growth in defaults and delinquencies slowed last year, suggesting progress in the administration’s efforts to get borrowers current.

But the officials acknowledge that a large pool of borrowers have essentially fallen off the radar. The Education Department has assembled a “behavioral sciences unit” to study the psychology of borrowers and why they don’t repay.

“We obviously have not cracked that nut but we want to keep working on it,” said Ted Mitchell, the Education Department’s under secretary. He said many defaulted borrowers dropped out of school and are underemployed.

Carlo Salerno, an economist who studies higher education and has consulted for the private student-lending industry, noted that the government imposes virtually no credit checks on borrowers, requires no cosigners and doesn’t screen people for their preparedness for college-level course work. “On what planet does a financing vehicle with those kinds of terms and those kinds of performance metrics make sense,” he said.

Some borrowers aren’t repaying even when they can. Research from Navient shows that borrowers prioritize other bills—such as car loans, mortgages and heating bills—over student debt. A borrower who fails to pay down an auto loan might have her car repossessed; with student loans, there is no such threat.

Kristopher Mathews, 38 years old, is in deferment on about $11,900 in federal student loans. During the recession he earned a certificate at a Michigan-based for-profit college that teaches media arts, but he wasn’t able to find the well-paying job in radio that he hoped for.

Mr. Mathews now works as a logistical analyst for an auto company, making $46,000 a year. He says he devotes his income to caring for his family—he and his fiancée have three children—and paying off two credit cards and a car loan. “With all the other necessities in life I just don’t have” funds to pay student debt, he said.

Once his deferment expires, he isn’t sure if he will feel obliged to pay down his loan. “They promised me everything,” he said of his for-profit college. “And I honestly have nothing to show for it except a piece of paper that doesn’t really do me any good.”

Most borrowers who have defaulted owe relatively little—a median $8,900, according to the Education Department.

The administration maintains that the student-loan program, as a whole, will generate a profit over the long term, but the risk is rising that its revenue won’t meet the administration’s projections.

Even many borrowers who are current on their loans are paying very little. More than a third of borrowers on an income-based repayment plan had monthly payments of zero because their incomes were so low, according to a Navient survey last year.

The administration’s pursuit of troubled borrowers is drawing criticism from student advocates and their allies in Congress. Last week, the American Civil Liberties Union and the National Consumer Law Center sued the Education Department, accusing it of blocking public access to data on the agency’s debt-collection efforts. The groups suggested that the companies collecting debt for the department might be discriminating against black and Hispanic borrowers.

Dorie Nolt, a spokeswoman for Education Secretary John B. King Jr., said the agency is reviewing the groups’ public-information requests.

“The singular goal of our student loan program is to help all students get a degree that sets them up for success, and we take the treatment of our borrowers—particularly historically underserved students—very seriously,” Ms. Nolt said in an email.